I spent this past weekend in Washington, D.C. at the Ignatian Family Teach-In, a conference for Jesuit colleges, universities, and high schools.  It was an amazing time to reunite with old friends and have the conversations that have bonded us into a family – how we have been doing and where we hope to be going.  It was also nice to meet an entirely new group of people who have jumped into their college careers feet first ready to take life by the wheel and choose where they’re driving.

But the most unexpected part was the impact of the conference that enlightened me and left me feeling inspired. The Jesuits are strong proponents for justice and have weaved it throughout their educational foundation.  Even though I have spent almost six years at a Jesuit college, I haven’t exposed myself enough to issues dealing with justice.  I haven’t gone on service trips, that have spanned from across the country and world, to see first-hand the injustice that spans our world.

However, hearing the stories from fellow students and speakers on issues like immigration, violence and violation of human rights, prejudice and discrimination, lit a fire in me.  I heard stories of innocent and impoverished peoples from all across the world that are robbed of their dignity and humanity and it didn’t just break my heart – it broke my soul.

That was when after being educated on issues like immigration reform, violence in Central America and sustainable energy policies I realized that the many issues that I didn’t feel I had an opinion about I was suddenly burning with passion.

We lobbied on Capitol Hill for these issues and I found myself with a frustrated appreciation for our political system.  I say frustrated appreciation because I appreciate that as Americans we can voice our opinions and have a conversation to better our world.  However, I am frustrated because it seems our government officials are more concerned with “being right” and making someone else “wrong” or having “power” and making someone else “powerless.”  Instead of focusing on fixing issues Republicans and Democrats are more concerned with fighting each other than helping the people who need their help.  I guess that is why I have pushed myself into an indifference toward government policy – until I realized this weekend that action is a lot more effective than apathy. 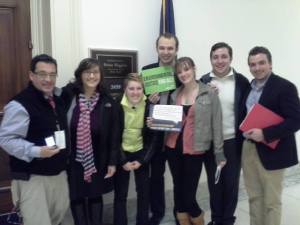 After reflecting with some of the most inspirational students and friends, the passion for reform took over.  When it comes to any major issue our country and world is facing, we need to look at others as human beings.  We need to treat every person with dignity and compassion and understand that even if someone is different than us, that does not discredit what they can bring to this world.  So instead of being closed off to others, let’s greet them with open hearts, minds and arms.

Instead of living the status quo of a world of poverty and hunger, let’s help those in need and maybe then we will see a better, stronger, healthier and happier world.  Let’s not turn our faces toward ignorance and indifference. But instead search for injustice whether it is in our neighborhood, community or on the other side of the world.  If we take action in the smallest way, we can help others, inspire others and just then change can happen.

2 thoughts on “Working for justice”

What Do You Think? Cancel reply